A carrier has an altered form of a gene that can lead to having a child or grandchild with a genetic disorder.

Both males and females can both be Fragile X carriers

In Fragile X, unlike some other X-chromosome linked disorders, both males and females can be carriers and both can be affected by Fragile X syndrome.

It is estimated that about 1 in 250 women and about 1 in 800 men are carriers of the Fragile X premutation.

What does it mean to be a Fragile X premutation carrier?

The changes in the FMR1 gene can go through stages as that gene is passed down in a family. These stages start with the normal FMR1 gene, and can expand to the premutation and then the full mutation. The differences in the stages are determined by the number of CGG repeats (repeats of a DNA pattern) in the FMR1 gene as it is passed on to offspring. In female carriers of Fragile X, the repeat size can be unstable and increase in size as it is passed on to future generations.

A normal range of this gene for an unaffected person is between 1-54 CGG repeats. 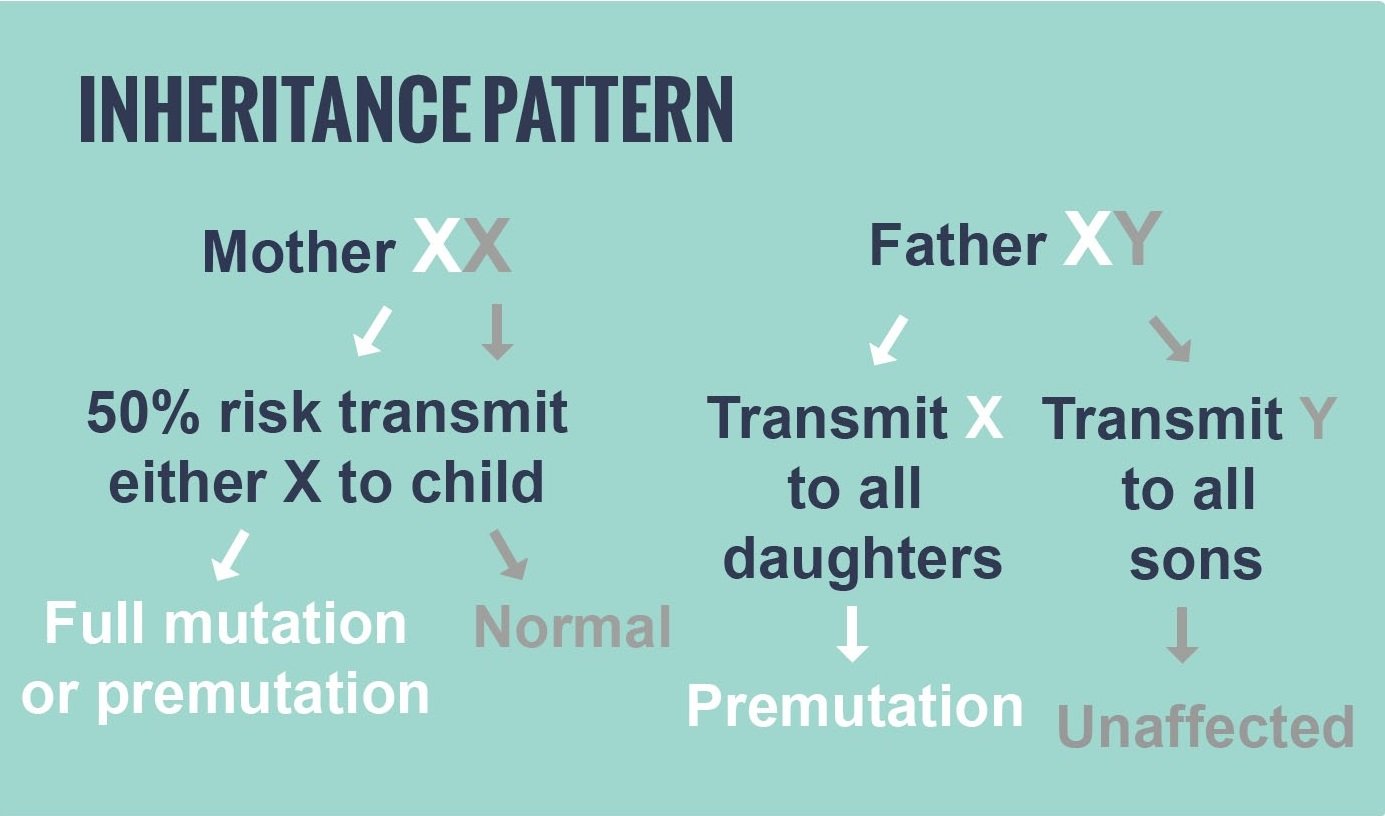 Traditionally, a carrier of a genetic alteration (mutation) is defined as a person who inherits an altered form of a gene but shows no effects of that alteration.

It is important to note that only some women and men who carry the premutation experience related health concerns, and the experiences of individuals will differ. Researchers are seeking to understand why this is the case.

Potential health concerns include Fragile X-associated Primary Ovarian Insufficiency (FXPOI) which is characterised by fertility issues and early menopause, and is experienced by 25% of female premutation carriers. Other health concerns that have been reported to be more frequent among premutation carriers who are women include anxiety, depression, thyroid problems, auto-immune issues, fibromyalgia (chronic pain and tiredness), migraines, sleep disturbance, and auto-immune issues. Prof Randi Hagerman has proposed the diagnostic term FXAND (Fragile X-associated Neuropsychiatric Disorders) to promote research, recognition and treatment for these problems. 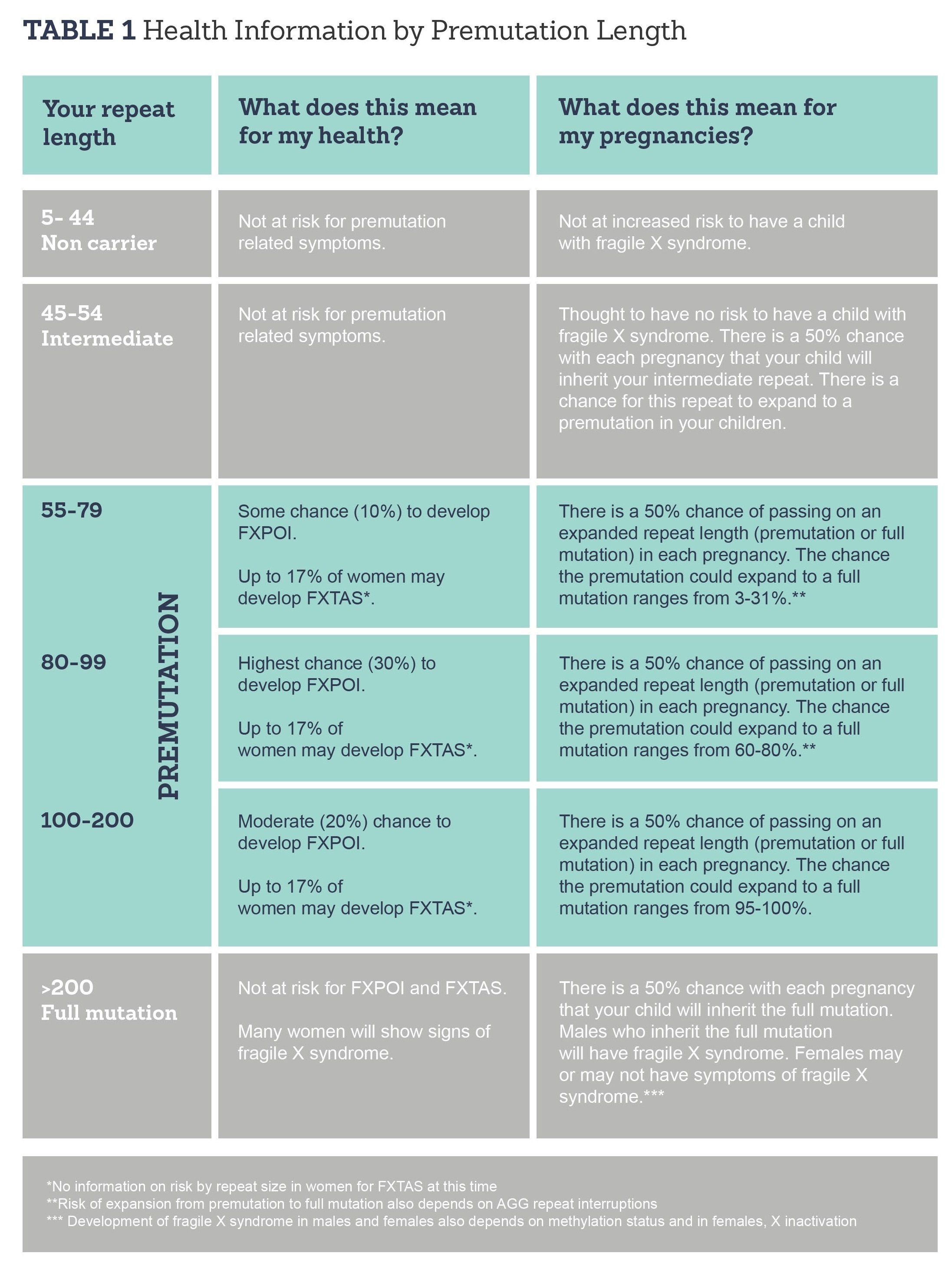 In older males, the most significant issue for men with a Fragile X premutation is the risk of developing Fragile X-associated Tremor Ataxia syndrome (FXTAS), which affects about 45% of male carriers over 70 years of age. It has been reported that some boys with the premutation have an additional diagnosis of autism, ADHD, or other learning/behavioural disorders.

Health and wellness for premutation carriers

It is important for any Fragile X carrier experiencing any health problems to consult with their general practitioner, or a specialist. Advice and treatments should be sought for any specific health issues. A healthy lifestyle and minimizing stress can increase health outcomes for everyone.

Dr Randi Hagerman (UC Davis MIND Institute) talks about health and wellness perspectives in her presentations and lectures about Fragile X, and this is covered in several videos. 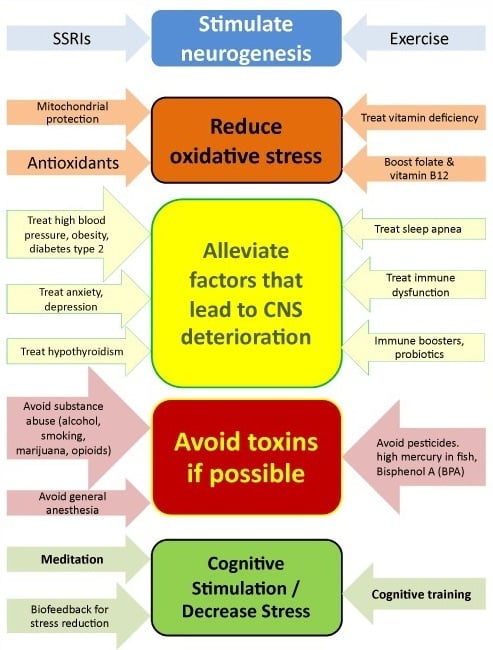 Figure 2: Recommendations and treatments to support healthy aging and support for FMR1 premutation carriers including medications, complementary and alternative treatment methods, and lifestyle changes as evidenced by similar neurodegenerative disorders.

There are a number of information sources online which will be helpful in understanding the Fragile X premutation. This list is not exhaustive.

Health and Wellness for Carriers of the Fragile X Premutation, Q&A with Prof Randi Hagerman

Has several video presentations on Fragile X, including premutation carriers.

Webinar: Supporting siblings of children who have Fragile X syndrome